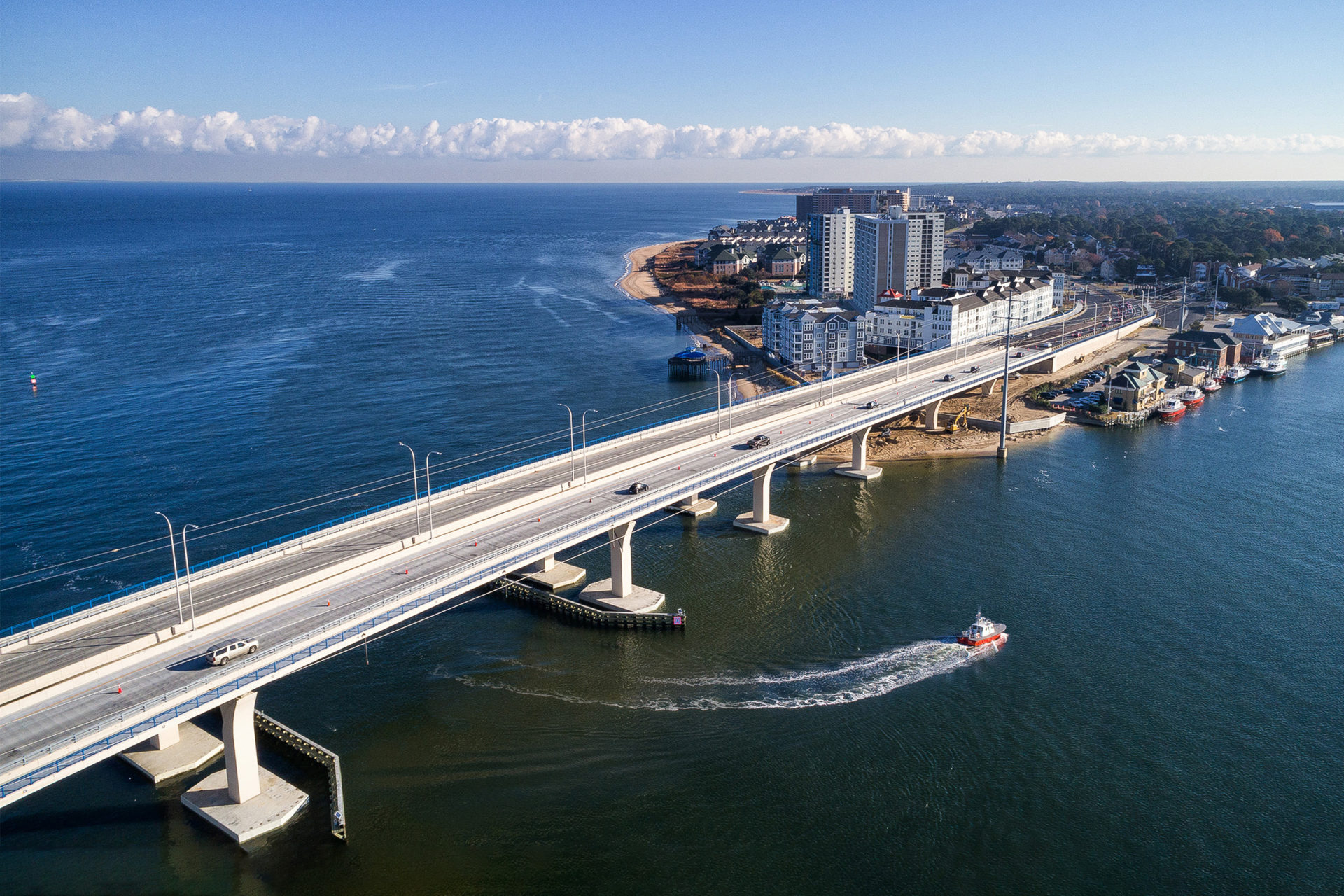 A signature bridge in the Hampton Roads region, Lesner Bridge is heavily trafficked as a critical link in area infrastructure. Throughout its life cycle, Clark Nexsen has been heavily involved with the bridge; from inspection and rehabilitation of the former structure to partnering with the City of Virginia Beach on the design of the new Lesner Bridge. The new bridge is a striking multimodal connector with safe, attractive space for bicycles and pedestrians as well as vehicles, the result of significant public involvement to ensure the surrounding community felt a strong sense of ownership and pride in the project. LED lights on Lesner Bridge have contributed to making the bridge a new visual icon for the area. They were designed by Randy Burkett Lighting Design. Photo: Chris Cunningham.

Design. Our team worked with the city and fellow consultants, including FIGG Bridge Engineers, Inc. for bridge design, to create a concept for the new Lesner Bridge that addresses modifications to roadway approaches, upgrades to adjacent intersections, the relocation of utilities to be hidden inside the bridge (increasing vertical clearance underneath), and aesthetic improvements within the project area. Through a process that emphasizes collaboration, multiple stakeholder groups were interviewed and participated in design charrettes to determine overall design direction and criteria. Additionally, our team took current and projected traffic volumes into account in order to design the roadway approaches to support future transportation needs in the area. A capacity analysis along the project corridor was conducted to evaluate current (2011) and future (2030) traffic conditions. These future conditions were projected utilizing a model developed by the Hampton Roads Planning District Commission, the City’s CUBE model, and the current Master Transportation Plan.

The design of a significant new coastal bridge requires effective, well-managed, multi-group communication to meet a variety of key challenges including coastal engineering; future traffic projections; environmental considerations; and public relations. Located at the Lynnhaven Inlet off the Chesapeake Bay, the proposed substructure units for the 1,550-foot long bridge will be subject to some of the fastest recorded tidal and storm surge currents in the Commonwealth of Virginia. To gather adequate information and design accordingly, VDOT requested the simulation of the storm surge velocities and flood limits for the entire, 45-square-mile Lynnhaven River Basin. Our team also undertook substantial coordination with multiple state and federal environmental regulatory agencies to ensure compliance with established standards. A 36-foot sculpture by artist, Donald Lipski, is poised on the pedestrian overlook of the new Lesner Bridge welcoming visitors into the beauty and history of the Chesapeake Bay area. Photos: Chris Cunningham.

Construction Administration. During construction, Clark Nexsen’s transportation experts worked closely with the contractor, McLean Contracting, to receive and respond to over 300 submittals and 200 RFIs for review by our engineers or other necessary parties. Some of the items reviewed by our engineers include multi-use railing shop drawings, aggregate mixes, MSE wall panel design (calculations and shop drawings), soldier pile retaining walls, construction staging area plan, and seawall sheet pile layout and details. Additionally, we performed punch-list inspections as well as initial NBIS inspections required to open the structure to traffic during the construction phasing.

Rehabilitation. The deterioration observed in our inspections drove the need to rehabilitate the old structure. Our initial findings showed some small spalls along the prestressed girders, but subsequent inspections revealed rapid advancement of the deterioration with the prestressing strands losing section due to corrosion. To slow down and possibly halt the deterioration, particularly at the prestressed girders, beam ends, and the piers, we performed an exhaustive study on best alternatives for prestressed girder rehabilitation. Based on the latest corrosion-inhibiting technology, we developed stringent guidelines and fleshed out plans for the rehab work. Upon successful bidding of the project, our bridge engineers performed periodic on-site inspections at critical points during the work, such as when deteriorated concrete had been removed (to verify the excavation extended the required 1 inch behind the prime reinforcing), to verify that limits of delamination had been properly saw cut and excavated, and that reinforcing had been cleaned and corrosion inhibitors properly applied.