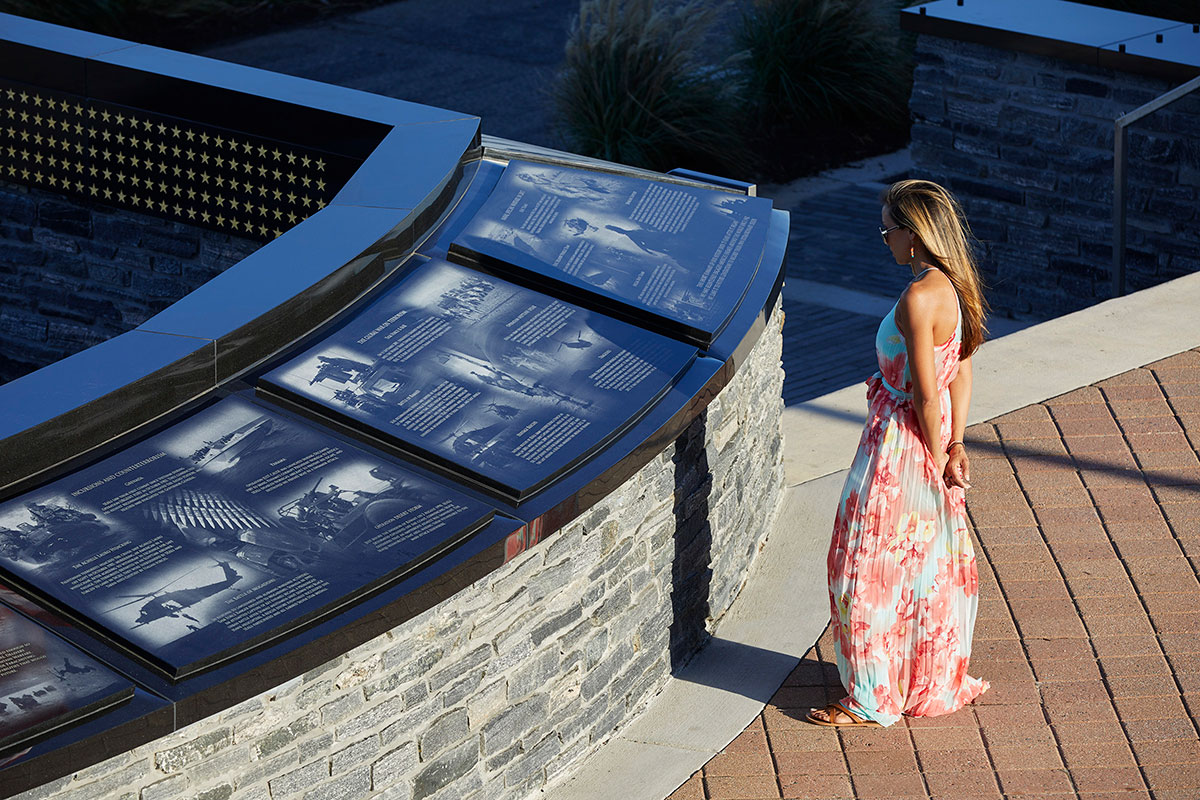 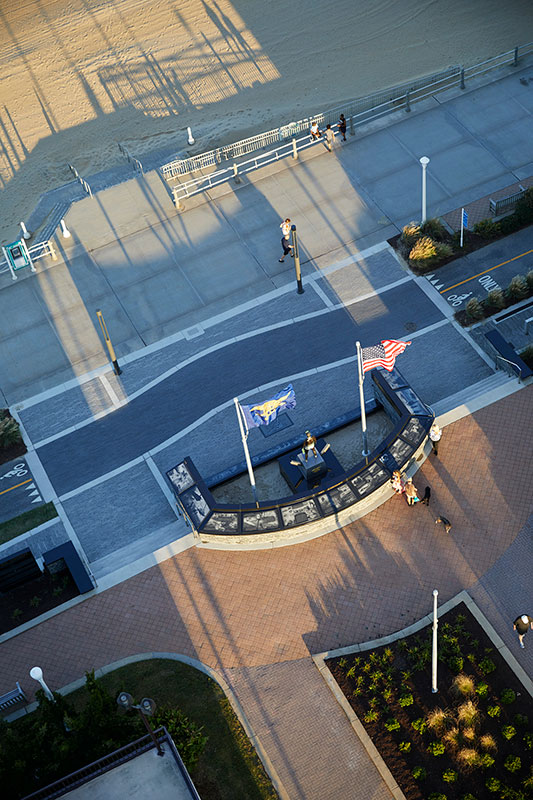 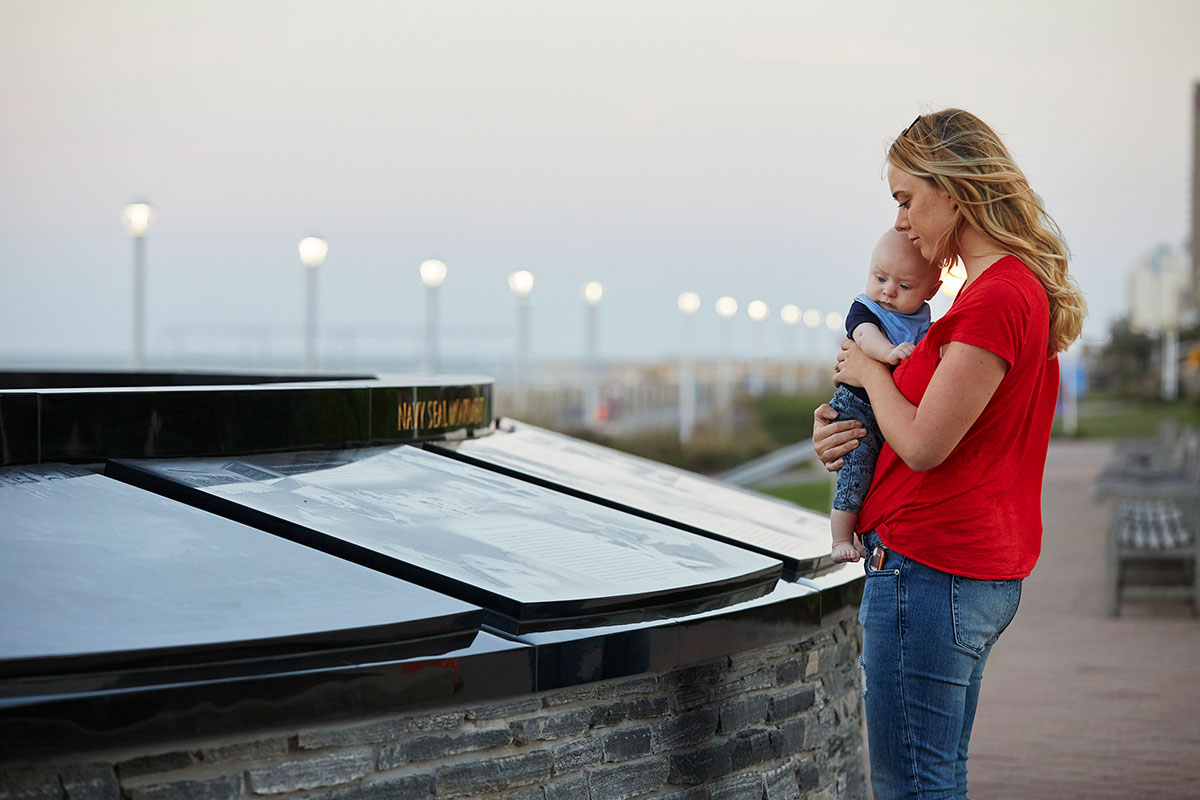 Navy SEAL history began in 1942 in Virginia Beach when volunteers for World War II special missions came together to train, later distinguishing themselves in combat during Operation TORCH in North Africa. Despite their long and storied past in Virginia Beach, no public tribute honoring the Navy SEALs and their forerunners could be found along the popular oceanfront, a highly-trafficked tourist destination filled with hotels, restaurants, various attractions, and monuments. However, that changed in 2017 when a distinguished monument design honoring the Navy’s warrior elite was dedicated. A partnership between the Navy SEAL Museum in Fort Pierce, FL, the City of Virginia Beach, and Clark Nexsen delivered a Navy SEAL monument unlike any other to the oceanfront.

Serving as an iconic landmark and source of pride for Virginia Beach residents and visitors alike, this monument is the result of a shared vision and close collaboration between the Navy SEAL community, our design team, and the City of Virginia Beach.

The City saw this as a special opportunity to honor the SEALs by contributing the land for the monument, located on the boardwalk at 38th Street facing the Atlantic Ocean. The project is a testament to the value of collaboration and translating client vision into a meaningful destination. All parties worked together to create a monument that strives to connect with visitors emotionally through its design, materiality, and sequencing of visual information regarding Navy SEAL history.

The monument design features the iconic Naked Warrior statue, also found at three other SEAL heritage sites. The Naked Warrior depicts an early “Frogman” atop a beach obstacle, facing the ocean and gathering himself to conduct a combat mission. The statue is life-size, denoting the SEAL reputation of ordinary men who do extraordinary things in the service of their country. Aligned with this ethos, the statue is surrounded by a sleek, low-profile stone wall that curves along the natural contours of the site. Distinguished from the other SEAL heritage sites, the Virginia Beach monument celebrates and recognizes all SEAL teams and illustrates their extensive history. It is representative of the City’s long history with the SEALs and their continued role as a location most SEALs will visit during their years of service.

Throughout the design process, close collaboration with former Navy SEAL Rick Woolard, who spearheaded the project vision, along with other representatives from the SEAL community led to the integration of design elements that honor tactical contributions from around the world. Sand from significant locations where SEALs have trained and fought will surround the base of the Naked Warrior statue and continue to evolve as a “living beach.” Sand will be added over time by future service members. Additionally, the wall features one star for every Navy SEAL and one paw print for every SEAL K-9 killed in the line of duty. The monument also includes a description of SEAL history along the upper boardwalk plaza. The design provides visitors the opportunity to engage with the monument and gain new insight into the role this elite force plays in protecting our nation.

Clark Nexsen provided pro bono design services for this monument. As a firm headquartered for many decades in Norfolk and now in Virginia Beach, our connection to Naval Operations includes our own employees, their family members, and many design projects. It has been an honor to collaborate with the Navy SEAL community to make this monument a reality.