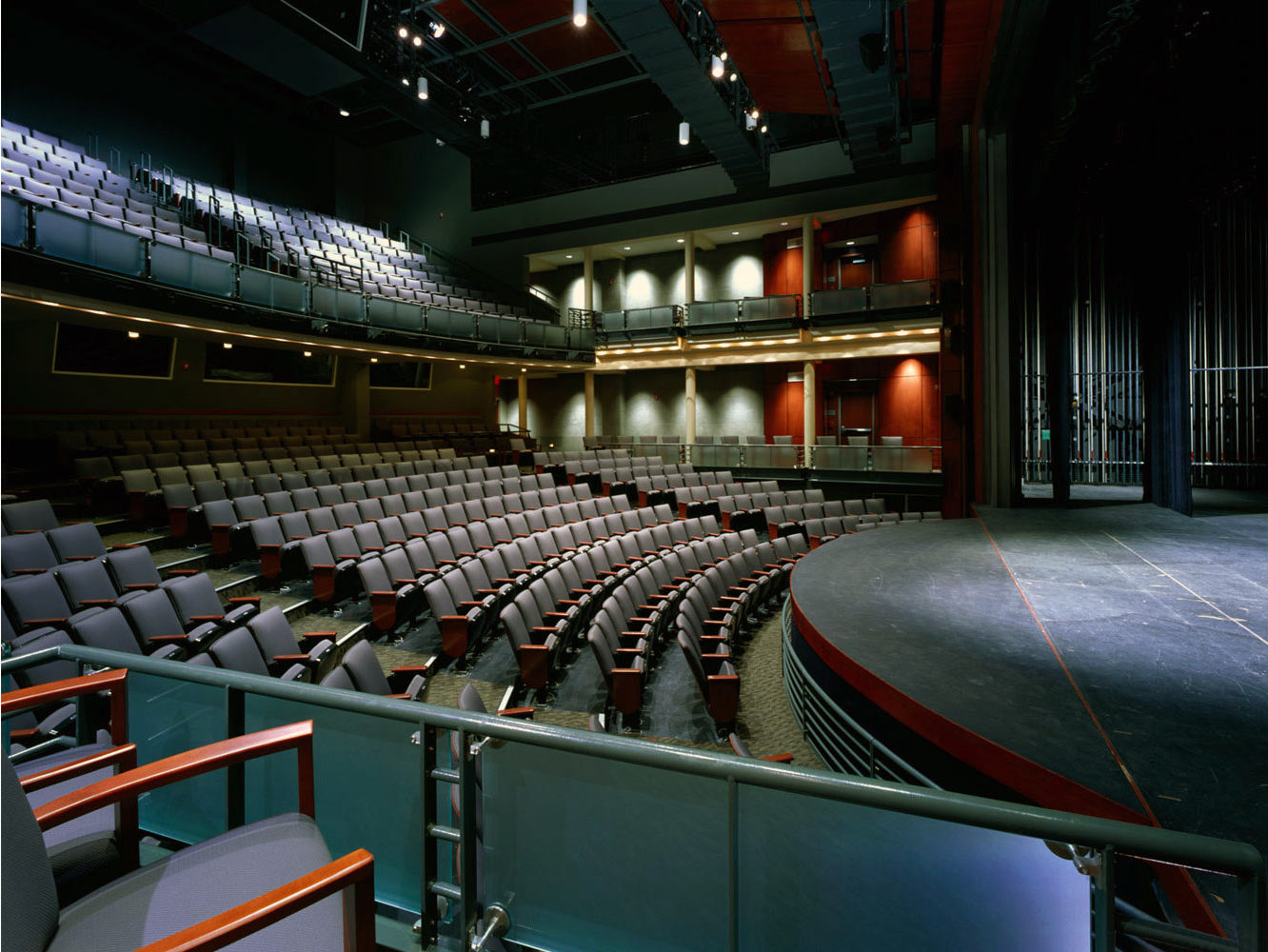 Six years after completing the renovation and lobby expansion of Memorial Auditorium, Clark Nexsen was retained by the City of Raleigh to study the possibility of the further addition of two performance spaces: a 600-seat theater and 1,700-seat concert hall. We determined the site could accommodate these additions, and that based upon the scale and location of this project, urban design issues would be of great importance. We were also aware that the functional and formal characteristics of the two venues were vastly different. The design of the Duke Energy Center for the Performing Arts evolved from these clear realizations.
We did not want to compete with the central, octostyle lobby and felt it was important to generate a design solution that presented a uniform, civic scaled façade composition across the entire site. The front façade relates to its surroundings at an urban scale. It is one of the longest continuous elevations in downtown Raleigh. Anchoring the ends of the façade with two limestone pavilions creates visual connections across the site and delineates its boundaries. A highly engineered curtain wall and glass canopy stretch between the pavilions and template front on both sides, unifying the new and existing performing spaces behind.

Both halls are essentially introverted volumes surrounded on three sides by lobby and circulation space and at the rear by backstage functions. The “shoebox” massing of the Meymandi Hall is directly influenced by acoustical concerns. The compact mass of the Fletcher Opera Theater and its associated stage house is directly influenced by sight lines and by providing a close, intimate connection to the stage.
Meymandi Hall (1,700 seats) was designed and constructed with virtually every decision being guided by concern for acoustical performance. For example, the sidewalls of the hall are pre-cast concrete panels, set deliberately non-parallel. The ceiling of the space is made of perforated metal panels, allowing sound to pass through where it then reflects off of a pored concrete roof deck. The HVAC system is delivered via an under-slab air plenum so as to eliminate any noise contribution. Interior finishes of the concert hall include cherry paneling, painted plaster, perforated aluminum panels, acoustical fabric, painted drywall, and textured coating over concrete.
The Fletcher Opera Theater (600 seats) provides a surprisingly intimate relation to the stage. Every seat in the theater is within seventy feet of the stage front. The stage itself is one of the largest and most well-equipped stages in the country for a theater of this size. The theater can accommodate a large variety of performances. Finishes in the Fletcher Opera Theater include cherry paneling, painted structural steel, honed and cleft Vermont slate, frosted glass balcony fronts, painted drywall, stained concrete floors, and carpet.